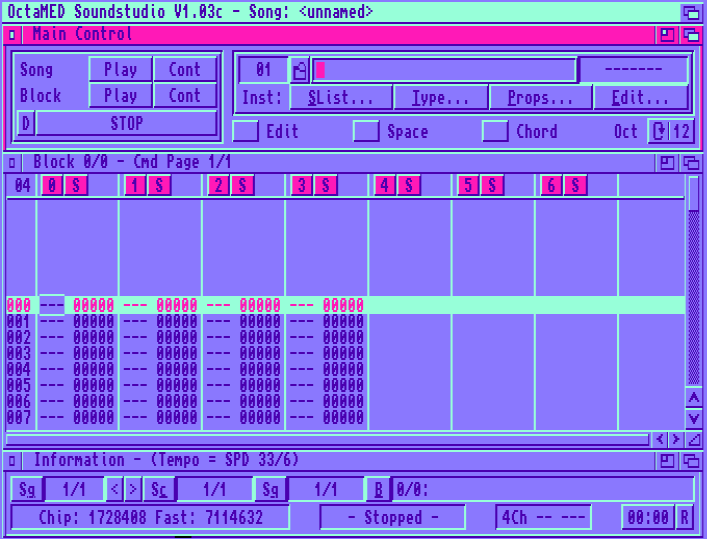 OctaMED SoundStudio (OSS) is the latest iteration of the MED/OctaMED tracker series started by Teijo Kinnunen. You can read a bit more about it on Wikipedia, but basically OSS is the seventh and last iteration of the software on the Amiga platform.

There are several versions of Octamed Soundstudio (OSS) floating around, so it's super confusing at first:

The original Install script is meant to work from floppies, does not copy everything to save space, and has an error, let's fix all this. This installation assumes that your lha files are in Chocolate:vault/OctaMED_1.03c-Vanilla/ and that we want to install OctaMED in Chocolate:run/. Adjust to your own preferences. You also need to have Installer software installed, see Amiga Notes.

As explained in the ReadMe_First! file, the built-in help will only work if you provide the absolute path to the help file. It's very unlikely that your install will have the same path as the one provided. To fix this:

You may have noticed that in Chocolate:run/OctaMED_Soundstudio/Soundstudio.config other paths could also be adjusted, namely Directory_Songs, Directory_Instr and Directory_ARexxScripts. Let's config all these.

You can now enjoy some drum 'n' bass. Alternatively get yourself nearly a whole GB of OctaMED modules at Modland!

OctaMED comes with a an extensive Online Help system that should work out of the box if you have configured the paths correctly like above. But it was also distributed with a printed manual that contained extra information. This printed manual was eventually distributed as a guide file. See Files.

For convenience some files have been uploaded here: